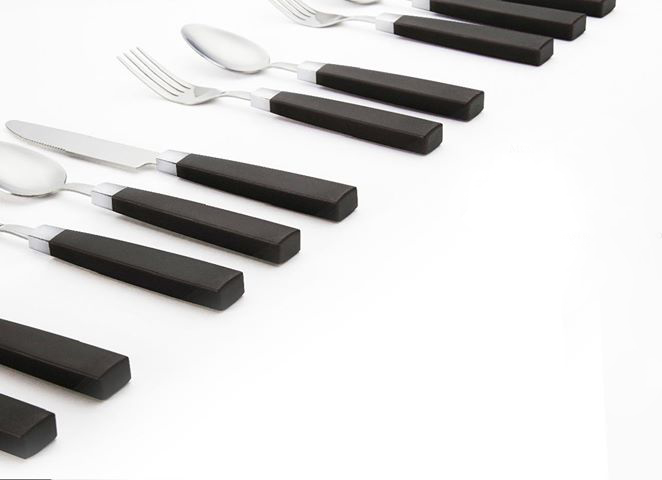 If music be the food of love, play on,
Give me excess of it; that surfeiting,
The appetite may sicken, and so die.

Today we embark on the search for traces of a very fruitful connection enriching both the mind and the stomach: music at the table.

There is enough evidence that already in Sumer and ancient Egyptian music was played not only during religious ceremonies, but occasionally during the meal. We can also find many representations from the ancient Greece, Rome, and Israel testifying to the splendor and pomp of ancient royal dinners, where scantily clad artists gracefully represented their musical skills.

There is, however, very little information about the sound of antique music. Still, some musical formations are successfully working on the revival of the “spirit and flesh” of that time and bring to sound again what once seemed lost. One of them is “Musica romana” from Cologne.

In the late middle Ages, with the further differentiation of the society in Western Europe and the emergence of professional guilds, even more complex forms of the tradition arise. During this time, the composing of music develops into a real profession and composers start looking for new ways to make money. The so-called “Tafelmusik” ​​or “Musique de table” turns out to be quite a lucrative business because writing for a feast was often rewarded much better than in the church or in even an opera house!

For example, the delicious “Musique de Table” by Händel not only made him very famous but also wealthy, which was not particularly surprising given the price of the published score: a single set of parts of the composition was sold for eight “taller”, the sum that Johann Sebastian Bach was paid at most for an entire orchestral performance! The scores of Händel’s “Musique de Table” were sold to rich music lovers over 200 times all over Europe. In return, the names of all the buyers (in a special kind of subscription) stood on the score of the first edition. 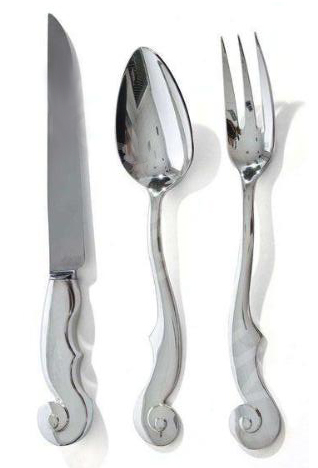 From about the beginning of the 17th Century the Tafelmusik becomes one of the most important musical genres, in addition to church music, opera and dance suite. One of the first known examples of Tafelmusik of the time is “Banchetto Musicale” by Johann Schein (1617) but virtually all the prominent composers of the time contributed to the genre: Avenarius, Hammerschmidt, von Beaver, Ehrhard, Delalande, Lully, Telemann, Vivaldi and others.

In 1619, the German composer and music theorist Praetorius describes in his famous work “Syntagma Musicum” for the first time some theoretical foundations of Tafelmusik. Mostly, all the pieces were written in the same key and designed in the form of a suite like following: overture, quartet, concerto, trio, solo (a kind of cadenza) and finale.

Usually the music had many quotes from famous contemporary compositions. Actually, to quote the music of other composers was not considered plagiarism at the time; often it was even considered an honor! In the already mentioned “Musique de Table” by Händel there are at least 13 known citations!

In the 18th Century, compositions for larger ensembles like concerto and symphony displace Tafelmusik on big stages. The former Tafelmusik finds a new life under the new name of “Harmoniemusik”, literally, “harmony-music”, which reflects its cast – it is written exclusively for wind ensembles which were called Harmonie.

These ensembles can be found everywhere and in all layers of the society: at the court, in an aristocratic house, in the tavern round the corner. Their repertoire consists of specially written original works but also of all kinds of potpourri from popular operas or other compositions. Mostly it is a quartet of two oboes and two bassoons, or a sextet of two oboes, two bassoons, and two horns. Often the oboes are replaced by a pairs of clarinets.

For many musicians composing Harmoniemusik means a serious source of income, Mozart and Beethoven are among them. Already in his young days in Bonn, Beethoven writes his Octet in E-flat major as a commission of Cologne’s Archbishop Maximilian Franz. It was a great success and an important step in Beethovens composing career.  20 years later this work served as the model for Schubert’s famous Octet.

At the turn of the 18th and 19th Centuries composers

also start to write compositions where the culinary moment is mentioned but the music is no more intended as background for dining. A good example would be the cantata by Johann Sebastian Bach „Schweigt stille, plaudert nicht“, better known as “Coffee Cantata” telling about an addiction to coffee. Mozart wrote for his opera “Don Giovanni” a very famous “Tafelmusik”, which initiates the final feast of Don Giovanni. From Schubert we know the “Trout Quintet” where he uses his famous song “Die Forele” (The Trout) as a theme for variations.

In the 19th Century, with the emergence of the cult of the “genius”, the connection between culinary and musical is seen as too unromantical. It is a time in which the “fleshly lusts” give more and more place to the concept of “eternal love”. What once was Tafelmusik oder Harmoniemusik is now euphemistically called “Divertimento”.

The famous gourmet Giacomo Rossini creates something very special. In his last years, he writes piano pieces entitled “Ad antipasti e dessert” with some witty titles about foods. These pieces were not intended for publication but recently they were rediscovered, edited and recorded by a pianist from Cologne, Stefan Irmer.

Richard Wagner in his “Der Ring des Nibelungen” describes musically how Siegfried’s mind changes under the influence of the magic potion, which is handed to him by Gutrune. It is a very special episode because here the effect of the drink is implemented with purely musical means!

There is an anecdote about Liszt from this time showing the change in the relation between meal and music. The famous pianist and composer did not appreciate it very much when he was invited to a society only in order to entertain the guests with his piano playing. Once after a dinner he was asked to retaliate for the food with his art. Maestro went solemnly to the piano, let his hands slide from one end of the keys to the other, closed the panel, then turned to the audience and said with dignity:

“Alright, the dinner is paid for!”

In the twentieth century the original tradition of Tafelmusik is resumed by several composers of the neoclassical school. In 1932 Paul Hindemith wrote his wonderful nostalgical “Tafelmusik” for a chamber orchestra but also the “Hamburgische Tafelmusik” ​​by Gerhard Maasz and “Eine kleine Tafelmusik” ​​by Jeno Takacs find much resonance and are warmly received by the audience. The Cologne-based composer Bernd Alois Zimmermann writes a sarcastical ballet “Musique pour le Soupers du Roi Ubu”.

Two Russian composers have discovered a new interesting access to the topic: both Prokofiev in his opera “Love of Three Oranges” and Khachaturyan in the ballet “Cipollino” make fruits and vegetables to actors participating in the action. However, the Culinary itself plays here just a minor role.

Our story about the connection between the culinary and the musical wouldn’t be complete without mentioning my own music that is why I would like to present it as well.

First, I would like to mention my suite “King Arthur’s Table Music“, a concerto grosso for flute, oboe, clarinet, bassoon, horn, trumpet and string orchestra. The choice of wind instruments as soloists evokes the tradition of Harmoniemusik. What is unusual here, it is the role of the string orchestra which is mostly accompanying and creating the background atmosphere of the piece. Many motifs make allusions to the Baroque tradition of Tafelmusik, thus reviving its unmistakable flair.

The composition Consists of five parts:

My piano suite “Amuse-bouches” continues the tradition of the Baroque suite, which itself was also 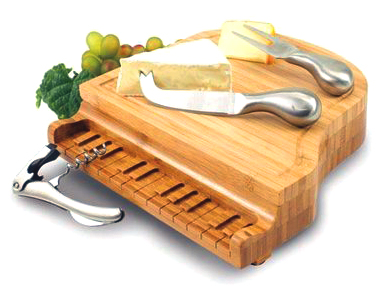 strongly influenced by the Tafelmusik. There are many stylistic allusions to the music from that period but also to the classic-romantical tradition.

The main title could be translated from French as “snacks”. The single titles of “Amuse-bouches” sound like “Allegro con brie”, “Coq-au-vin à la rococo”, “Chopin-gnons sautés”, “Pâté-tic”, “Spaghetti polonaise” or ” Pointillis-mousse”. Since the allusions in the titles are not of purely culinary origin, real “eatable” equivalents would not be possible. They rather try to stimulate the imagination and give some inspiration to the listener.

One very special feature of this suite is the extremely short duration of the pieces – each piece only takes one minute. Here you can recognize the influence of the avant-garde French cuisine, widely known as nouvelle cuisine. The brevity of the pieces of the suite symbolizes the very short though intense moment of pleasure that we experience enjoying delicious appetizers.

You can listen to “Amuse-bouches” on my website where you will also find some entertaining descriptions and explanations of all the single titles:

The suite “Petit-fours” for violin and piano is dedicated to 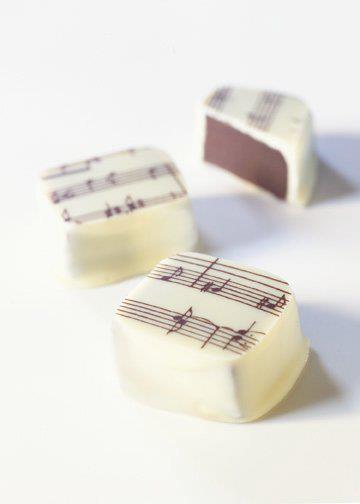 sweets. The title is of a French origin and means a “small oven” where small confectionery or savoury appetizers were made next to the main oven. Sometimes “Petit-fours” were also made in the main brick oven during the cooling process. The single titles of the suite sound like “Le sacre du sucre”, “Contrepoint de vanille”, “Mordants en caramel” or “Soufflé virtuoso à la Paganini”. There are 25 of them, also in versions for flute or flute alto.

You can find a detailed description of the pieces and their titles as well as a virtual audio on my homepage.

„Eine kleine Naschmusik“ (“A little nosh music”) for violin and piano, is another “sweet” composition, an effectfull and very virtuoso homage to Mozart. You can also find a virtual audio of this piece on my homepage.

Finally, I would like to mention my piano piece “Hors d’hoeuvre d’un faune” (“The appetizers of a Faun”) from “Suite royale”. It is a homage to Debussy’s “L’après midi d’un faune”. The piece has a subtitle: “in four flavors”.

In the recent times more and more concert promoters try to create new opportunities to present traditional classical music. One of them is having a fine dinner accompanied by a small ensemble or at least a soloist in the background. Often they invite barock music ensembles, sometimes even playing original instruments.

It remains to be seen whether this trend continues. One of the major challenges is that the audience of these dinners is not willing to spend more than 60-70 € for the event and both a good kitchen and good live musicians cost some money. It is only profitable for the organizer in a big set with many invited guests. Still, there seems to be a big public interest so we can look optimistically at the future of this wonderful tradition.

P.S. Special thanks to Maria Dolnycky for critical corrections!