When they hear that I’m a composer, 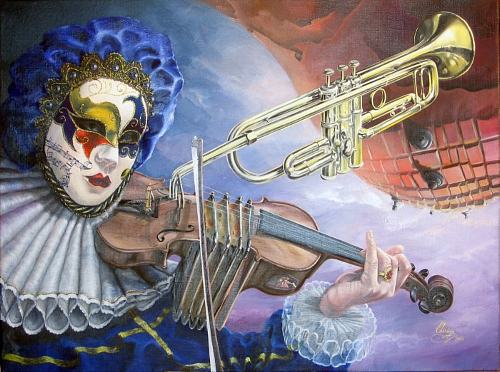 casual acquaintances often ask me about the kind of music I write. Is it pop, rock, or jazz? I tell them it’s modern classical, which undoubtedly leads to a short surge of admiration, followed by a question reflective of the knowledge and educational endeavors of my interlocuteur:

“What is it, really? Some kind of ‘avant-garde’ à la Stockhausen?”

On such occasions, it is rare to hear someone speak of Shostakovich, Khachaturian, Messiaen, Pärt, Schnittke, Kancheli, or Glass, although they are very often performed and their music always encounters crowded concert halls.

It is a very strange situation, and in this blog, I will try to shed some light on the matter.

When a new novel by Murakami, Rushdie, Pelevin or Eco is announced, the readers are looking forward to read it and they quickly find the book in the next bookstore, good visible near some thrillers, detective or love stories and other bestsellers. They actually do become bestsellers themselves! 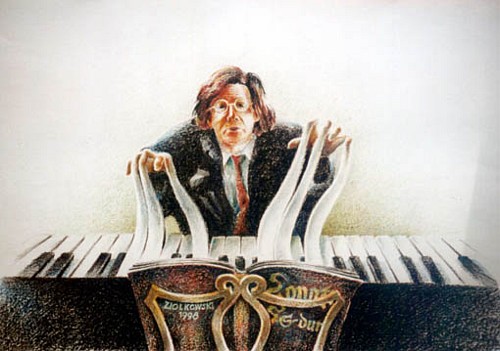 On the contrary, in a music recordings store we experience at once a total predominance of pop, rock, hip-hop and dance music, maybe some jazz and world music, presenting most new recordings on CDs and DVDs, but when we take a look at the classics department, what we spot are the names of star instrumentalists and conductors performing music from the past. Why?

Two seemingly unrelated questions, on closer inspection they turn out to have a clear connection, and I hope to unveil it for you as well as its reason. To this end, please allow me to make a somewhat seditious statement.

Despite the tight inner relation the musical genre called “avant-garde” (or, as we call it in Germany, “Neue Musik”), it is not a hereditary continuation of classical music, but rather, a new branch on the tree of musical tradition, just like jazz, ethno, salsa or tango – also complex and aesthetically beautiful but independent genres that do share much expressive means with classics. 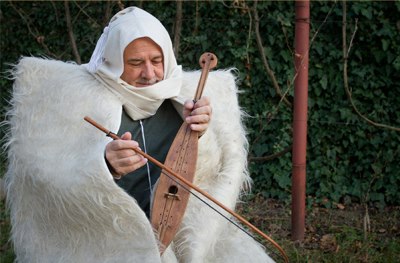 by Shostakovich or ballets by Stravinsky have indeed much more in common, for example, “Pierrot lunaire” by Schoenberg, written almost in the same year than Stravinsky’s most famous masterpiece “The Rite of Spring.” Of course, there are some or even many similarities between the musical language of the latter two in form, rhythm and colors, but aren’t there also many between, say, tunas and dolphins? Still, they follow very different paths of evolution, and one is fish while the other mammals – a different paradigm of life forms.

The same is with music: external likeness can be deceiving! In order to better understand the situation, let me invite you to take a closer look at the most constitutive aspect of music, one that distinguishes music from other forms of art – the relationships of pitches (“Tonhöhen” in German), commonly called “harmony” or “harmonic relations” by musicians. 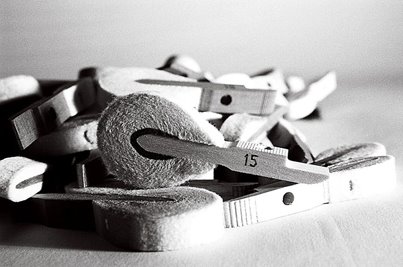 complex rhythms, colors, semantics, dynamics or articulations can be found in other kinds of art – painting, film, poetry, sculpture, etc., only the relationships of pitches are exclusive to music and in their complexity not translatable to other arts. For a better understanding, it must be mentioned that pitches shouldn’t be mixed with the notions of altitude and height in architecture, which have rather a symbolical meaning and belong to semantics.

If we observe the development of music harmony through time, we quickly recognize that the avant-garde really represents a new model, a new paradigm of musical art, as jazz, for example, did in its time. I am going to show you the difference using the language of symmetry, as it seems to me the easiest one to follow for the non-musicians among you.

There are two main types of symmetry governing the

structure of any work of art. The first of them is the golden ratio, a proportion between two parts where the smaller one relates to the bigger as does the bigger to the whole (to the sum of both parts). In a very rough approximation this relation is 1:2 (more precisely 1:1,618). 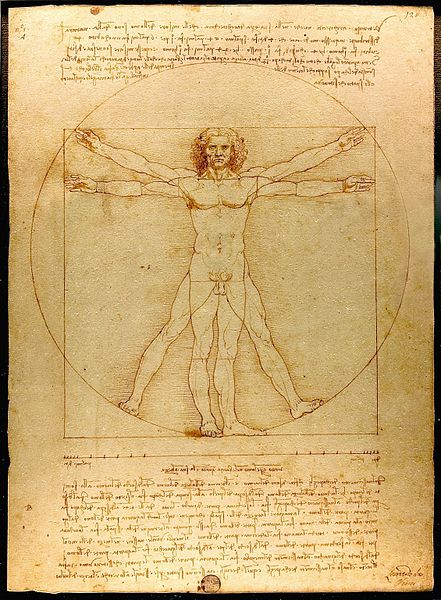 As the parts in the golden ratio are not equal, it promotes hierarchical functional relations between sounds and chords.

The second principle is a simple repetition, or in a more generalized form, a periodicity. It can be reflective or rotational, and it prevails in an inanimate matter, such as crystals, for example. That is why it is also called “static symmetry.” Nevertheless, it is widely present in nature, and if we take the human body, the periodicity governs its shape horizontally, i.e. it mirrors from one side to the other. The periodicity promotes flat or egalitarian relations, where the elements are not unique but mostly exchangeable.

Now let us take a closer look at music harmony.

As far as I can tell, ALL western musical tradition is built on the harmony of the golden symmetry. With some certainty, it applies to the whole Indo-European tradition going back to several millennia! Concretely, it can be recognized at the preference of relations that can be traced back to the overtone sequence, one of the main notions in acoustic studies.

Every musical tone has a fundamental frequency and many so-called overtones or partials which are higher frequencies resulting from the vibrations of smaller parts of the string or the air mass in a wind or brass instrument. An example of such a ratio can be a subdivision of a string into two, three, four, five, six, etc. equal parts by pressing the string at exactly that point, after what the shorter part of the string would sound, respectively, an octave, a fifth, a quarter, a major third, a minor third, etc. higher from each other.

The same happens when the air mass in a wind instrument tube (such as a flute) becomes shorter after the division through a hole – in the middle, at a distance of one third, one fourth, one fifth, one sixth, etc. These divisions also sound, respectively, an octave, a fifth, a fourth, a major third, a minor third etc. higher from each other.

From a historical point of view, the development 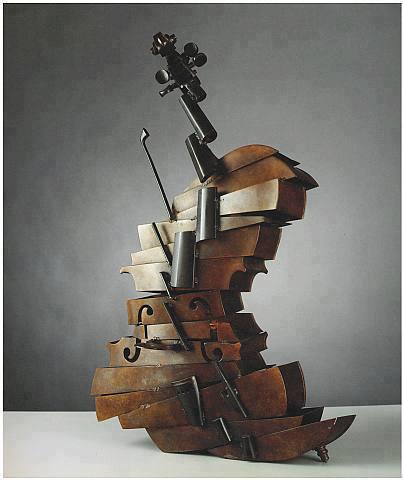 of music harmony (especially in polyphony, the multi-voice tradition) is constantly moving towards more complexity of relations and, at the last stage, to even distorting or layering of more simple structures. Good examples thereof would be the music of Stravinsky, Prokofiev, Britten, Hindemith, Messiaen, or Schnittke. Still, the basic harmonic principle can always be traced back to the symmetry of the golden ratio.

During the millennia, we are so used to listening to music based on the symmetry of the golden ratio, that even in the case of the so-called “free atonality,” we are still trying, unsuccessfully, to recognize at least some remnants of the classical tradition. The reason why we don’t succeed in recognizing them lies in the fact that the new tradition created a completely new model of pitch relations substituting the symmetry of the golden ratio with periodicity. 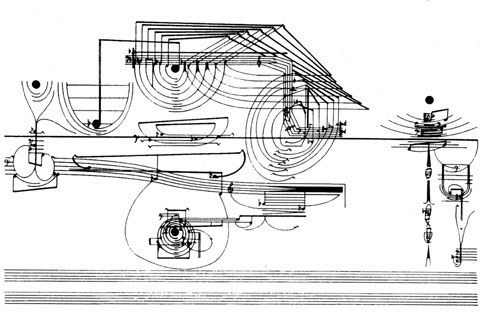 The second choice is the tritone and minor third (or a minor sixth) as an indication of the division of the octave into, respectively, two and four equal parts. The most typical chord is the mix of these intervals and, where earlier parallel octaves ran, there are now parallel major sevenths. Clusters and pointillistic structures are also very suitable in establishing the periodicity in the harmony and the independence of the 12 tones.

There is also a subdivision of the octave into three 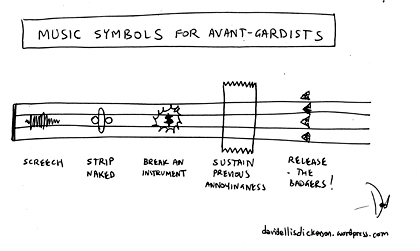 equal parts building the so-called augmented triad, or into six equal parts building the so-called whole tone scale. Both were extensively used in the beginning of the 20th century, also in the classical tradition as an element of estrangement. Still, for the build-up of thirds, typical in the classical tradition, these scales and chords could be easily integrated into the context based on the golden symmetry. In avant-garde music, the ambiguity of the augmented triad and the whole tone scale were frowned upon and generally avoided.

By the way, in the music of other traditions, for example in the Indonesian “slendro” or “pélog” scales, other divisions of the octave are used. Thus, the “slendro” scale is a strict division of an octave into five equal parts, and the “pélog” scale uses seven tones chosen from the strict division of an octave into nine equal parts. Some other divisions have been tried out in electronic music.

Speaking of other musical parameters, I would like to point out that the periodical symmetry has always dominated the rhythms but not the note values, which have shown, in particular with the evolution of triplets, quartuplets, quintuplets and so on, a clear affinity with the golden ratio.

Musical form is a well-balanced mix of both principles – the small parts of a composition lean towards periodicity, the bigger ones towards the golden section, which is why the climax is normally positioned at the point of the golden ratio.

Markings of intensity, or dynamics (such as piano or forte), when measured properly in accordance with the air pressure produced by the sound, match a sequence of octaves, thus leaning towards the golden ratio, but can by no means be compared to pitches or rhythms in their complexity. 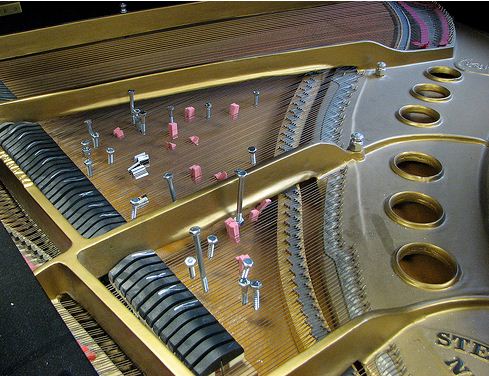 world, especially as part of festivals dedicated exclusively to this new musical art. Still, it has difficulties to be accepted by the audience of classical music in a traditional concert environment.

The composers of the avant-garde tradition have always claimed to be a logical continuation and even the successor of the classics. Actually, the term “avant-garde” itself (meaning “fore-guard”) is misleading, as it positions avant-garde as heir to the classics, which shouldn’t be affirmed after careful consideration. Still, as a marketing instrument, it has helped a lot in establishing a new tradition and helping it to survive.

The new development confused a big part of the traditionally oriented audience, who started to associate “contemporary” with “avant-garde,” very often ignoring or “forgetting” that all the other extremely successful composers whom they listen to with pleasure, like Shostakovich or Khachaturian, Pärt or Glass, are also MODERN but consequently continue the classical tradition. People tend not to associate them with the terms “contemporary” or “modern,” and they are more known just for their names.

As a result, one part of the audience, hungry for new experiences but unable to accept the avant-garde approach, turned to other genres of music, such as jazz or rock. Another part of it discovered historically older layers of music, especially Baroque music and even earlier music, performed on original instruments. The more conservative part of the audience started to develop a constantly growing interest in new interpretations of known works.

Some elements of the avant-garde have found their place in music of the classical tradition, such as in the music of Schnittke or late Stravinsky. I myself also quote it sometimes, but it remains an element of estrangement, like Chinese music by Borodin, jazz by Stravinsky, gamelan by Debussy, or birdsong by Messiaen. In all these cases, the “strange” style has a symbolical meaning and is not the proper foundation of harmony.

Returning to the original question about whether there is such thing as modern classical music, I definitely can say yes!

P.S. If you found this blog interesting, please share your opinion! I would be happy to continue talking to you about the matter and, of course, please feel free to learn more about my music on my homepage as well as on Youtube:

P.S. 2 Special thanks to Maria Dolnycky for critical corrections! 🙂

2 thoughts on “Is there such thing as “modern classics”?”